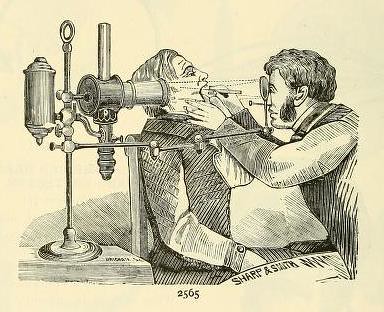 In The Secret Language of Doctors by Dr. Brian Goldman, medical practitioners go by many names. Surgeons are cowboys while internists are fleas. ER physicians are triage monkeys and obstetricians are baby catchers. Urologists are plumbers and anesthesiologists are gas passers.

But how about those old-timey words for doctor? Today we look at eight such terms and the stories behind them.

“All alienists are agreed as to the greater frequency of mental alienation in the summer season.”

Alienist is an old term for psychiatrist, especially one that acts as an expert in a court of law. The word comes from the French aliéné, “insane,” which also gives rise to alienation, “emotional isolation or dissociation.” Alien meaning “strange” or “foreign” comes from the Old French alien, also meaning strange or foreign.

“When Barnaby True came back to his senses again it was to find himself being cared for with great skill and nicety, his head bathed with cold water, and a bandage being bound about it as carefully as though a chirurgeon was attending to him.”

The Online Etymology Dictionary says this hard-to-pronounce word is a “failed Renaissance attempt to restore Greek spelling to the word that had got into English as surgeon,” and is  “now, thank the gods, archaic.”

The much more accessible surgeon ultimately comes from the Latin chirurgia, “surgery,” which comes from the Greek kheirourgos, “working or done by hand.”

However, the Old English lyce, early Middle English liche, and Middle Dutch lieke suggest that leech the parasite began as a distinct word and morphed into leech due to “popular etymology.”

“In our walk through the town, I was accosted by the Medicine Man, or doctor, who was standing at the entrance of a lodge, into which we went.”

John Bradbury, Travels in the Interior of America, 1817

The term medicine man first appeared in English around 1801, says the OED, probably coming from the Ojibwa mashkikiiwinini, physician, where mashkiki means medicine and inini, man.

The Online Etymology Dictionary says the English word medicine was adopted by North American Indians in the sense of “magical influence,” and that they called the U.S.-Canadian boundary Medicine Line “because it conferred a kind of magic protection: punishment for crimes committed on one side of it could be avoided by crossing over to the other.”

“The mountebank now treads the stage, and sells His pills, his balsoms, and his ague spells.”

A mountebank is a charlatan who sells fake meds, also known as nostrum. The word mountebank comes from the Italian montambanco, which comes from the phrase monta im banco, “one gets up onto the bench,” with the idea of a con artist getting up a on bench to hawk his fake wares.

“It may likewise be observed that as patient who has once been under the hands of a quack is ever after dabbling in drugs.”

A quack is another word for a sham doctor. The word is short for quacksalver, which is Dutch in origin and translates as “hawker of salve.” The Dutch quacken means “to brag or boast,” and literally, “to croak.”

“I thought everybody know’d as a Sawbones was a Surgeon.”

Sawbones is slang for surgeon, and may have been coined by Charles Dickens. Curious about what an old-timey amputation saw looked like? Check it out.

“It was Dr Hilarius, her shrink or psychotherapist.”

This slang term for a psychotherapist is a shortening of headshrinker. The word headshrinker seems to have first appeared in a 1950 Time magazine article about Hopalong Cassidy: “Anyone who had predicted that he would end up as the rootin’-tootin’ idol of U.S. children would have been led instantly off to a headshrinker.” According to Shrink: The Untold Story of Psychiatry, the article noted that headshrinker is “Hollywood jargon for psychiatrist.”

The OED’s lists Pynchon’s as the first use of shrink.

One thought on “8 Old-Timey Words for ‘Doctor’”