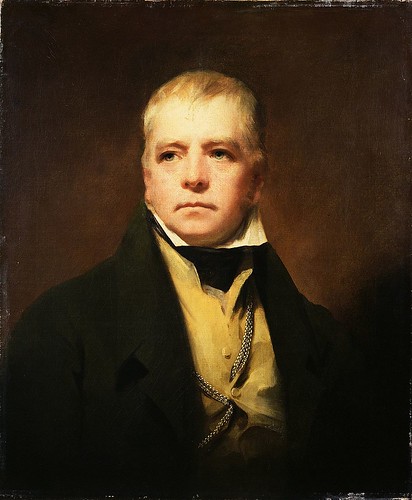 Great Scott, it’s Sir Walter’s Scott’s birthday! Born in 1771, the Scottish poet and novelist is the author of such classics as Ivanhoe, Rob Roy, and The Lady of the Lake. He also introduced into English words from German, Norse, and of course Scots that we still use today. Here are eight of our favorites.

“The support of the two Berserkir would be of the greatest advantage to him.”

Scott introduced both berserker and berserk into the English language. Berserkers were ancient Norse warriors known for their “savagery and reckless frenzy in battle” (perhaps due in part to the ingestion of hallucinogenic mushrooms). They would also wear bear or wolf pelts in battle, hence their name, which translates from Old Norse as “bear shirt.”

“On this singular gorget was engraved, in Saxon characters, an inscription of the following purport:—’Gurth, the son of Beowulph, is the born thrall of Cedric of Rotherwood.’”

Cedric the Entertainer can thank the Scottish poet for his name. According to the Online Etymology Dictionary, Cedric was a mistake for the Old English Cerdic. The name Cedric peaked in popularity in the 1960s, says the Baby Name Wizard.

“Ye may mind that the Countess’s dislike didna gang farther at first than just showing o’ the cauld shouther.”

The next time someone gives you an icy reception, warm up by imagining Scott uttering his invented idiom in Highland brogue. The Online Etymology Dictionary says that while cold shoulder began in a literal sense, it was also often used “with a punning reference” to a “cold shoulder of mutton,” which was considered a “poor man’s dish” and perhaps something served to “an unwanted guest with deliberate intention to convey displeasure.”

“The witches of Auldearne, according to this penitent, were so numerous, that they were told off into squads, or covines, as they were termed, to each of which were appointed two officers.”

Letters on Demonology and Witchcraft, 1884

While coven meaning a gathering of witches was first used in the 1660s, it was Scott’s use that popularized the word. Coven might be a variation of covent, a Middle English word for “convent,” a community of nuns.

“We omit here various execrations with which these honest gentlemen garnished their discourse, retaining only such of their expletives as are least offensive.”

The word expletive has been around since the early 17th century, but Scott was the first to use it to mean a profane, vulgar, or obscene oath. The word comes from the Late Latin explētīvus, “serving to fill out,” which reflects an earlier sense, a word or phrase that has no meaning but is only added to “fill out a sentence or a metrical line.”

“I offered Richard the service of my Free Lances, and he refused them.”

Who’d have thought contractors and consultants had something in common with medieval mercenary knights? When Scott first used freelance, he was referring to such adventurers who offered their services in return for payment, with the idea that their lances were free to the highest bidder.

By the 1850s, says the OED, freelance also referred to “a politician or controversialist with no fixed affiliation to a particular party or viewpoint,” and by 1899, someone who works as a freelancer.

“Why performed in such a solitude, and by what class of choristers, were questions which the terrified imagination of the adept, stirred with all the German superstitions of nixies, oak-kings, wer-wolves, hobgoblins, black spirits and white, blue spirits and grey, durst not even attempt to solve.”

A nixie is a kind of water elf or fairy. The word comes from the Old High German nihhussa, “water sprite.” Nixie also refers to, in American English, a piece of mail that’s undeliverable due to an incorrect or illegible address. This sense comes from nix meaning none or nothing.

“I advise no man to attempt opening this sporran till he has my secret.”

A sporran is a fur or leather pouch worn at the front of the kilt as part of the “the traditional dress of men of the Scottish Highlands.” The word ultimately comes from the Middle Irish sparán, which might come from the Late Latin bursa, “bag.”