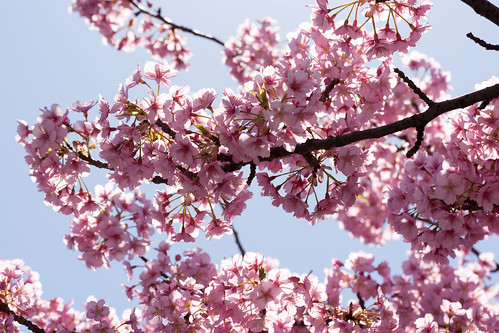 If you’re in the D.C. area you’re in luck: it’s “peak bloom” week for cherry blossoms.

If you don’t have the chance to enjoy the pink pulchritude in our nation’s capital or elsewhere, please enjoy the stories behind these five Japanese cherry blossom terms.

“The Japanese tradition of ‘hanami’ – or the cherry blossom viewing picnic – has survived relatively unchanged since about the eighth century.”

Hanami, which translates from Japanese as “flower viewing,” is the Japanese custom of “enjoying the transient beauty of flowers,” especially cherry blossoms.

The custom started in the eighth century during the Nara Period when it was plum blossoms that got all the attention. However, by the late 700s, cherry blossoms had stolen the show.

Nowadays, hanami parties are immensely popular all over Japan, featuring live music and “lavish picnics” that include onigiri; hanami bentos, bento boxes with spring-like hues of pink, red, and orange; and hanami sake.

Other Japanese nature-viewing words include momojigari, the “hunting” of autumn leaves, and tsukimi, moon viewing.

“The phrase ‘hana yori dango’ literally means ‘dumplings over flowers’ and is usually used in a teasing way to refer to someone who prefers food (something of substance) over something beautiful or romantic.”

Kay, “Capybara enjoying a meal at Ueno Zoo treats us to the herbivore’s version of ‘Hana Yori Dango,” RocketNews24, April 1, 2014

Hana yori dango, or “dumplings over flowers,” is a saying that has its origins in hanami, says Japan Talk, and means that “people are often more interested in the food and drink at hanami parties than the flowers themselves.”

Hana Yori Dango is also the name of a popular manga series, Boys Over Flowers, where dango, which means sweet rice dumplings, is a pun for “boys,” according to NPR.

“We thus see that the cherry blossom, called sakura by the Japanese, represents the ‘spirit of Japan.’”

Another common cherry blossom saying is, “Dead bodies are buried under the sakura!” This seemingly creepy pronouncement is the first line of “Under the Cherry Trees,” a 1928 short story by Japanese writer, Motojiro Kajii. The quote refers to, not literal corpses under cherry trees, but a “sense of disbelief at the beauty of sakura blossoms and suggests that history somehow adds to this beauty.”

“Not inappropriate for, as I have said, the plum blossoms appear very early and the Japanese go umemi, or plum blossom viewing, with sprigs of the flower stuck in their fur caps.”

Umemi is the viewing plum blossoms, rather than cherry (ume is the Japanese word for “plum”), and usually occurs in the late winter or early spring, “just before the more famous ‘sakura’ cherry blossoms,” says Japan Info Swap.

Umeshu is a Japanese liqueur made from plums steeped in sugar and sake.

“So great is the attraction of cherry blossoms seen by the light of the pale moon, that they have even been given the special name of Yozakura or night cherry flowers.”

Florence Du Cane, The Flowers and Gardens of Japan, 1908

Yozakura translates from Japanese as “night sakura.” Yozakura Quartet is a Japanese manga about four teenagers who live in a town called Sakurashin, which “is protected by a barrier created by the spiritual sakura known as The Seven Pillars.”