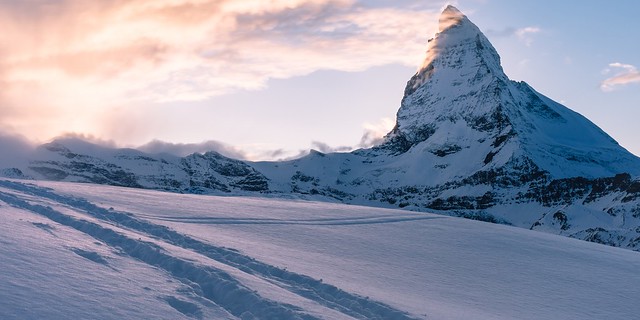 You might have heard the Scots have over 400 words for snow (while it’s a myth that the Inuit have 100). We have just 10 splendid snow words here, but we love them all the same and hope you do too.

“The sun was sliding toward the horizon, throwing beautiful but alarming alpenglow on the mountains and valleys below.”

One of our favorite unusual nature words, alpenglow refers to that “rosy glow that suffuses snow-covered mountain peaks at dawn or dusk on a clear day.”

The word is borrowed from German, says the Oxford English Dictionary (OED), and has been in use in English since at least the 1860s. Alpen of course comes from the name of a certain mountain range.

“Before they could get to this a deep bed of old snow — ‘firn’ Melchior called it — a great sheet, like some large white field, had to be passed.”

George Manville Fenn, The Crystal Hunters: A Boy’s Adventures in the Higher Alps, 1891

Firn, also known as “old snow,” is granular snow “that has passed through one summer melt season but is not yet glacial ice.” The word translates from German as “of last year,” and ultimately comes from the Old High German firni, “old.”

“Graupel…is precipitation that forms when supercooled droplets of water are collected and freeze on a falling snowflake.”

Another snow word of German origin, graupel is a diminutive of Graupe, German for “hulled grain.” Graupe is probably of Slavic origin and is related to the Russian krupa, “groats.” What the heck are groats? Crushed grain, especially oats.

“In the far distance rose several jokuls or glaciers, seeming to look proudly down upon the mountains, as though they asked, ‘Why would ye draw men’s eyes upon you, where we glisten in our silver sheen?’”

Ida Pfeiffer, Visit to Iceland and the Scandinavian North, 1853

Jokul is an Icelandic word that refers to a mountain always covered in snow and ice. The OED says the word comes from the Icelandic jökull, “icicle.” The English icicle is related.

“It was a very grey day; a most opaque sky, ‘onding on snaw,’ canopied all; thence flakes fell at intervals, which settled on the hard path and on the hoary lea without melting.”

The Scots gifted us with onding, a heavy and continuous rain or snow. Onding also refers to breathing or smelling as well as a figurative onslaught or noisy outburst.

“A ‘poudre’ day, with its steely air and fatal frost, was an ill thing in the world; but these entangling blasts, these wild curtains of snow, were desolating even unto death.”

Gilbert Parker, Pierre and His People, 1892

The powdery poudre refers to dust, gunpowder, and also powdery snow. The OED says the word is Canadian but now rare, and originally came from the French Canadian poudre, “powder.”

A poudre day is a “day on which fine, powdery snow falls,” or “a bitterly cold day.” Poudré, another rare term, refers to someone who wears their hair or wig powdered.

“This, however, is not always practicable; should the storm, or, as it is called here, ‘purga,’ overtake him in the ravine of a mountain, such an immense quantity of snow becomes heaped upon him, that he has no power to extricate himself from his tomb.”

Otto von Kotzebue, A New Voyage Round the World, 1830

A purga refers to a violent blizzard of fine snow that might occur in “the eastern Asiatic tundra, northern and eastern Russia, and Siberia,” says the OED. While Russian in origin (obviously), the word purga might come from the Finnish purku, “snowstorm.”

“John is all for sleeping in the quinzhee, but having seen how thin Regent’s sleeping bags are, I exert what is left of my parental authority and take up our host’s suggestion that we use a nearby tent which he has equipped with a log-burning stove.”

Adrian Mourby, “Are you the right stuff for the white stuff?” The Independent, January 23, 2010

In addition to being an amazing Scrabble word, a quinzhee is a shelter made from a hollowed out pile of snow. The word comes from Slavey, which is part of the Athabaskan family of languages and spoken by the Slavey First Nations people in Canada. Quinzhee is a corruption of the Slavey kóézhii, “in the shelter.”

“As the sledge strikes each sastruga, it skids northwards along it to the discomfort of the wheelers and the disgust of the leader.”

Sir Douglas Mawson, The Home of the Blizzard: Being the Story of the Australaisan Antarctic Expedition, 1911-1914

A sastruga is “a long wavelike ridge of snow, formed by the wind and found on the polar plains.” The word comes from the Russian dialectal zastruga, where za means “beyond” and struga means (creepily) a “deep place into which one may fall.”

“Back then, grooming happened sometimes, on some trails, and on a flat-light day, an uncovered sitzmark, particularly an old one, could slam a guy into the ground in a heartbeat if hit just right.”

Sitzmark is a skiing term that refers to a depression made in snow by someone who has fallen on their sitz-parts. Sitzmark is German in origin. Another sitz- word is sitz bath, a chair-like bathtub in which one bathes in a seated position.