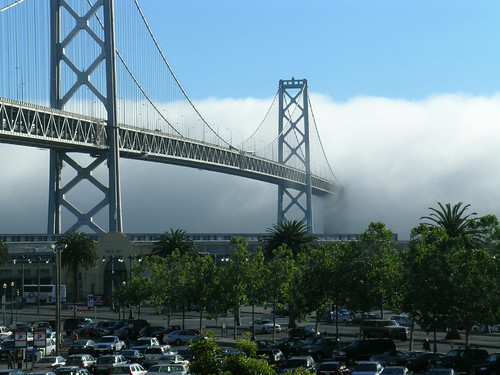 In the summer months, we here in the San Francisco Bay Area encounter a lot of fog. How much fog? The San Francisco rugby club is called the Fog. Our fog has its own Twitter handle (with almost 86,000 followers).

We love those roiling and rolling clouds of moisture and mist, and of course, just as much, we love the terms that describe them. Here are 10 of our favorite words about fog.

“In studying a 13th-century scroll where nine scaly dragons writhe through a sepia mist, Mr. Li focused on a spot near the center where the brume twists into a spiral.”

Lee Lawrence, “How to Talk Back to a Chinese Master,” The Wall Street Journal, January 27, 2011

Brume comes from the Latin word for winter, bruma, which also gives us brumal, relating to winter. Brumaire is “the second month in the calendar adopted by the first French republic, beginning October 22d and ending November 20th,” and is also known as “the month of mist.”

“Consider the Chilean ‘fog catchers’ of the Atacama desert, one of the world’s driest locales, who harness the camanchaca, or ‘creeping fog,’ with an ingenious system of nets that trap fog droplets and turn them into potable water.”

The camanchaca can be found on the coasts of Chile and Peru, and is Spanish in origin.

“With at least a day to spare you can also explore the Chongón-Colonche mountains, a little further inland, where dry forest morphs into cloud forest, with help from the garua, or sea mist.”

Similar to camanchaca is garua, which translates from Spanish as “mist.” Specifically, garua is “the heavy fog along the coast of Peru on which plants depend for their moisture.” It occurs from May to October and can rise to a height of a hundred feet.

“A regular St. Andrews ‘haar;’ and St. Andrews people know what that is. Miss Williams had seen it once or twice before, but never so bad as this–blighting, penetrating, and so dense that you could hardly see your hand before you.”

Haar (in addition to what a pirate says) is “a wet mist or fog,” especially applied “on the east coast of England and Scotland, from Lincolnshire northwards, to a cold sea-fog,” says the Oxford English Dictionary (OED). The word comes from the Middle Dutch hare, a “keen cold wind.”

“The Rev. P.H. Newnham came to his bedroom in the early morning and asked him to look out of the window and see the fog covering Plymouth Sound. . . .Mr G.W. Ormerod had also described a similar phenomenon at Teignmouth known as The Larry.”

J.B. Cohen, “One Cause of Autumn Mists,” Quarterly Journal of the Royal Meteorological Society, Volumes 30-31, 1904

Larry (not to be confused with Karl) means misty and also refers to a specific kind of “land-fog” as distinguished from another particular kind of sea-fog in the area around the River Teign in the county of Devon, England.

“People living near Seneca Lake in upstate New York have long known of similar booming sounds, which they called ‘Seneca guns.’ In coastal Belgium, they are known as ‘mistpouffers,’ or fog belches.”

The mistpouffer is a “a mysterious noise heard over the ocean in quiet, foggy weather.” It’s also known as barisal gun.

The word mistpouffer comes from the Dutch mistpoeffer, which seems to translate as “fog swelling.”

“But he continued motionless and silent in that gloomy Niflheim or fog-land which involved him, and she proceeded on her way.”

In Scandinavian myth, Niflheim is the misty, foggy realm of the dead, ruled by Hel, the goddess of death and the underworld. Niflheim can also be used figuratively, describing any hellish place. The word is Old Norse in origin, where nifl– means “mist” or “dark,” and heimr means “home.”

“The pea-souper fogs that once defined our capital city have long vanished, the last straw being the so-called Great Smog of 1952, when a thick cloud of pollution settled over London and penetrated deep into its inhabitants’ lungs for five days.”

A pea-souper is, according to the OED, a British colloquialism for “a dense, often yellowish fog or smog, usually associated with polluted urban areas,” especially in London. Related is Beijing’s orange fog warning, which indicates extremely high pollution levels.

Pea-souper is also a derogatory term for someone who’s French-Canadian, especially a Francophone from Quebec, perhaps because pea soup is a traditional Quebecois dish.

“In the western U.S., freezing fog often occurs in mountain valleys and may be referred to as pogonip, a Shoshone word that means ‘cloud.’”

Pogonip is based on the Native American Shoshone word pakenappeh, also defined as “fog,” and is commonly used in Nevada and other western states to refer to a thick, icy fog.

“Wave after wave of wet salt air was rolling in from the sea, pressing upon that which travelled slowly inland, so that the roke grew very dense, and the little house seemed to be cut off from all the world.”

In addition to steam, vapor, fog, or mist, roke is also English and Scots dialectical for smoke. The word might come from the Old Swedish röker, “smoke, vapour.”

Want more fog words? Check out this list. And don’t miss this gorgeous and mesmerizing timelapse video of San Francisco fog in action.